Music Perception in Adults with Down Syndrome

Individuals with Down syndrome reportedly have a strong interest in music and are noted for their aptitude in rhythm and movement/dance. Given the link between auditory and motor interactions, we have recently started a project to study the brain responses to familiar (“Mamma Mia”) vs unfamiliar music (Bach) in adults with and without Down syndrome.

Listening to music can evoke powerful emotional responses and affect the mood of the listener.  We can easily recognize familiar music from the first few notes and familiar melodies often bring back memories of specific places or events.  Yet the brain regions that are involved in recognizing familiar music pieces are still not well understood.  Dr. Naznin Virji-Babul and her colleagues (A. Moiseev, DSRF) and M. Huotilainen (University of Helsinki) and UBC students (N. Moiseeva, T. Feng) are studying the brain mechanisms involved in the perception of familiar and unfamiliar music.  Recently they have started a study to look at how the brain responds to a familiar tune – in this case, the popular  Mamma mia and a less well known melody by Bach (Musette) in young adults.

Subjects who were familiar with the tune listened to the instrumental version and sang along with the tune and/or clapped their hands prior to having a brain scan.  Listening to Mamma mia (see animation below) to in comparison to Musette, led to earlier activations in the auditory regions of the brain  and in the perceptual and emotion processing areas.   Interestingly, this melody also elicited stronger activations in the motor areas of the brain.  These results suggests that listening to familiar melodies not only leads to activation in a large network of areas that are involved in auditory perception and emotional processing but that musical memories are tightly coupled with action (such as singing or dancing).

The coupling between perception and action has received much interest in cognitive neuroscience since the discovery of mirror neurons.  First discovered by Rizzolatti, mirror neurons fire both when a person acts and when the person observes another performing the same action.  For example, reaching for a cup of coffee  will activate a network of areas including percpetual and motor related regions when simply watching someone else reaching for a cup of coffee. These results add to this body of work showing that when music is paired with motion such as singing, clapping or dancing, simply listening to that same piece of music will activate the same motion related areas.

These results have important implications for the use of music intervention for people with perceptual-motor impairments such as in Stroke, Parkinson’s diease, Alzheimer’s disease and Down syndrome.

Aging in Down Syndrome: A Model for Preclinical Alzheimer’s Disease

Postmortem studies show that at 40 years of age, almost all subjects with DS have neuropathological changes that meet the pathological criteria for AD. These changes include extensive cerebral atrophy, accumulation of ßamyloid, extracellular senile plaques and intracellular neurofibrillary tangles in the hippocampus and frontal and temporal cortices. DS is therefore an extremely useful model to study the preclinical stages of AD as middle aged individuals can be identified prior to any clinical signs of dementia. Our goal is to use MEG data to compute measures of functional connectivity that may be useful in predicting the onset of dementia. 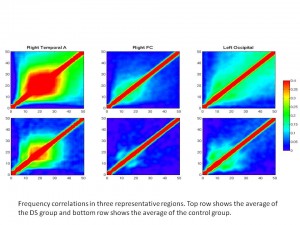